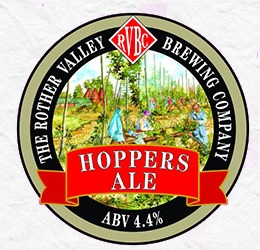 Rother Valley Brewing Company was established in Northiam in 1993 on a hop and dairy farm overlooking the River Rother that marks the boundary between Kent and East Sussex.

Cask and bottled beers are produced for distribution to many public houses, restaurants and shops in Kent and Sussex.

LEVEL BEST  was the first brew and has established a band of loyal drinkers in Kent & Sussex and is still our “flagship” beer some twenty two years later!

Our brewer, Colin Smith, has expanded the range of beers over the past twenty years providing a wide variety of styles and strength – some seasonal, some occasional, but all very distinctive.

Our beers are brewed in the traditional way using, as far as possible, malted barley from East Anglia and hops from a neighbouring farm located in Sandhurst.Hoads Farm grow a wide variety of hops and also have extensive vineyards.

We also regularly exchange our beers with other small brewers allowing us to supply our customers with products from around the country and for our beers to reach a wider audience. Recent exchanges have included North Yorkshire Brewing Company, Tring Brewery, Buntingford Brewery and Vale Brewery. Others are planned for 2015