How is the Landgate linked to the Norman Conquest ? Many people will know the Conquest started on the 28th of September 1066 with the invasion of England by William, the Duke of Normandy.  They may not be aware the French occupied the Town of Rye until 1247 when on the orders of Henry III it was reclaimed.

Establishing the “Cinque Ports” was a considerable achievement based upon an idea first put forward during the time of Edward the Confessor (1042-1066).  By the reign of Henry II (1154-1189), the towns of Hastings, New Romney, Hythe Dover and Sandwich were already known collectively as the “Cinque Ports”. Rye was later added along with Winchelsea as “Ancient Towns”.

The Royal Charter of 1155 which is the basis of Article 13 of the Magna Carta and Article 9 in the Confirmation of 1297. States “In return for ship service, the Cinque Ports were to receive:

“Exemption from tax and tallage, Right of sec and sac, tol and team, blodwit and fledwit, pillory and tumbrel, infrangertheof and outfrangertheof, mundbryce, waives and strays, flotsam and jetsam and ligon.”

Which as you know means:-
“Exemption from tax and tolls, self-government; permission to levy tolls; punish those who shed blood or flee justice; punish minor offences; detain and execute criminals both inside and outside the port’s jurisdiction; and punish breaches of the peace; and possession of lost goods that remain unclaimed after a year; goods thrown overboard and floating wreckage.”

This was also translated into a self policing community which eventually led to a large black economy involved in Smuggling and generally having a good time.

In 1339 the French attacked the town again and burnt down over 50 houses and a mill. It was at about this time that the mayor and corporation made a start on the town walls and gates, aided by money (”murage”) granted by the King Henry the III.

In 1377 the French returned to Rye for a short visit, generally attacking everything and everyone and yet again sacked Rye, this was probably the most savage of all visits as they burned practically every building in the town. Only a few stone buildings survived. 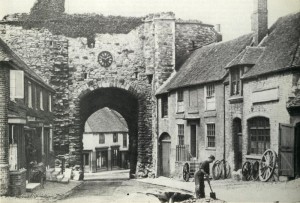 Pop into Clive Sawyers Photography Gallery, it is about where the open barn door is on this picture, Clive has travelled the World, been to most amazing cities and chooses to make Rye his home. You will see some of the amazing pictures of the Rye bay area mounted on Canvas, Aluminum and other media. Clive has contributed many of the pictures you will see used to promote the area.

The Landgate is the last remaining of two gates built to defend Rye from invading forces, which all started in 1066

The Strandgate shown below has long since disappeared but you can see where it was if you go the Heritage Centre on the Strand (by the large Anchor) where you can see the large scale Town model.  The Strandgate survived until around 1819 when it was destroyed, though a few remains of it have been incorporated into the Old Borough Arms hotel at the end of Mermaid Street

Today we still have many visitors from France, today like so many visitors they come as friends to explore our lovely little town.

A popular Bed and Breakfast is the Tower house just beyond the landgate in Hilders cliff, it’s a quiet Georgian Country House in its own large garden adjacent to the medieval Landgate Arch, which places it close to shops and restaurants and only Five minutes to the railway station, they have on site parking and English, German and Italian are all spoken by Jutta. 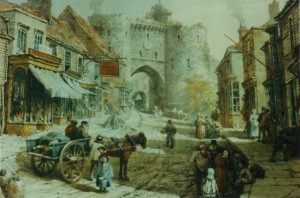 For those seeking self catering then perhaps a cosy 15th century Landgate cottage opposite the medieval Landgate arch which was recently refurbished whilst retaining period features would be of interest, the wood fire, pretty courtyard and being close to the galleries and restaurants ensures a comfortable stay.

The Queens Head Pub formerly the Kings Head, is a lovely original small town pub with a deceptive amount of space offering a good selection of local ales and wines, with an experienced chef and live music this is a lively pub enjoyed by locals and visitors alike.

Christmas In Rye The town looks amazing - come and see us next year
https://www.facebook.com/christmasinrye/

Advertise on the site - to be included email advertising@visitryebay.com click here for details/